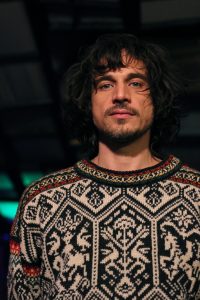 Rolling at a tempo lower than your average, Claus Fussek is here to teach the party people how to get down good and slow. Immersed in a global panoply of rhythms and timbres, the Berlin-based DJ and producer has spent more than 15 years shaping up a sonic signature that shirks the need to stomp at a strict BPM. In the depth and breadth of his exotic incantations, there’s more space afforded for the funk. Like George Clinton once said, it’s as much about the notes that aren’t played as the ones that are.

Fussek’s roots are in the German town of Wiesbaden and the KOMMDISCO crew. A lifelong group of friends with a shared passion for music oscillating well beyond the established norms, Fussek’s role within the collective has always been to warm the party up or wind it down with his psychoactive selections. In more recent times he’s linked up with the Mach Mal Langsam posse, who equally share his passion for low- slung grooves that encourage a more sensual kind of energy on the dancefloor. He’s graced the decks at clubs like Salon zur Wilden Renate, KaterBlau and Ritterbutzke, not to mention his natural environment in the open air at festivals such as Oewerall.

Beyond his dedication to sonic expression, Fussek also finds a creative outlet through his other life as a hairdresser. Now fusing these distinct but complementary practices, Fussek joins the roster for the Hair Sweet Hair Music agency to push his intoxicating musical message far and wide whether as a DJ, producer or through his newly developed live act. With a focus on weighty bass frequencies in the low end and uplifting threads of melodies up top, the sound of Claus Fussek is coming creeping onto your dancefloor, so get ready to get down slow.